Fish: An Unexpected Problem From The Pandemic

When a restaurant serves a fish whole, there is a reason it fits the plate perfectly. It’s because Boris Musa grew it that way. His indoor fish farm in Australia supplies restaurants with plate-size barramundi grown to 1.8 pounds. The coronavirus put the restaurant industry on ice for months, but Mr. Musa’s fish kept growing. That led to a big fish problem—as in, his fish were getting too big.

If Mr. Musa’s barramundi, a white fish popular in Australia, grow too much, the water-filtration system that is keeping them alive won’t be able to keep up. Once they tip the scales at about 3 pounds, he said, they’re too large for a restaurant dinner plate. To save his fish, and his future profits, Mr. Musa is turning to science. He is betting that by lowering the water temperature in his tanks, he can slow down the metabolism of his fish, reduce their appetites and stall their growth.

Fish farmers all over the world are trying to slow the growth of their fish as the pandemic wreaks havoc on supply chains and consumer demand. Others are trying different strategies: freezing their fish using liquid nitrogen, smoking them so they can be stored until demand returns, and skipping the restaurants and selling their fish online. Restaurants around the world are reopening, but the lockdown created a fish-farm backlog.

Fish farming now accounts for almost half of the world’s seafood production. But unlike traditional fishermen, who can stay in port if demand falls, fish farmers who have put time and money into growing their fish can’t just shut down.

“We’ve got to look at it as if we have a 16-month crystal ball,” said John Ng, president of Hudson Valley Fisheries, an indoor fish farm about 100 miles north of New York City. That is how long it takes to grow Mr. Ng’s steelhead trout to its target size of nearly 7 pounds. 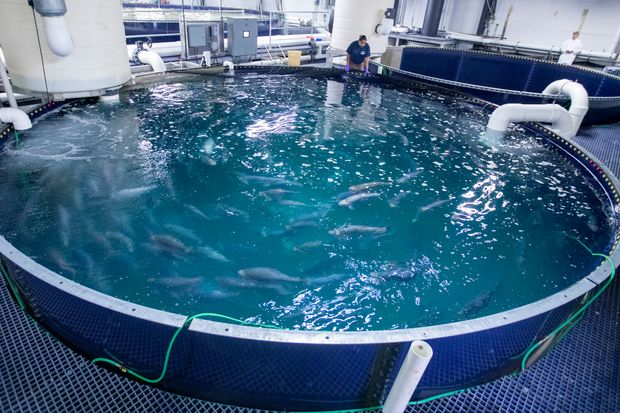 Unlike weekend anglers looking for bragging rights, fish farmers frequently don’t want monster fish in their tanks. They often judge a fish ready for sale when it grows to the size of a dinner plate—perfect for serving whole in restaurants.

Clean Seas Seafood Ltd., which farms kingfish off the coast of South Australia, has reduced the amount of food it is giving some fish that already have reached their target weight. But it can’t adjust its water temperature because its fish, often used for high-end sashimi, are farmed in pens in the ocean. Instead, the company is harvesting its fish mostly as usual and using liquid nitrogen to freeze them, which should give them a shelf life of at least two years. Clean Seas began using the technique before the pandemic, but has since increased its cold-storage capacity, Mr. Head said.

The comments to this entry are closed.