COVID On The Brain 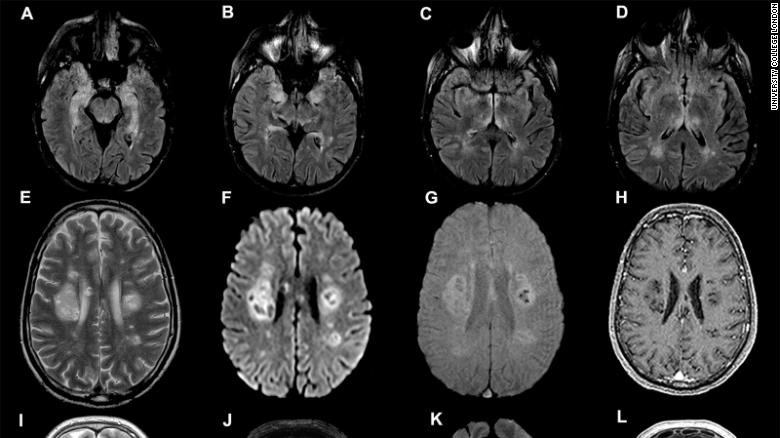 Many COVID-19 victims lose their sense of smell, suffer cognitive impairments, seizures, hallucinations, loss of motor skills, and paralysis, and these can take months to recover, or are permanent.  What is especially concerning is that young COVID-19 patients and even those with mild cases are also susceptible to these neurological problems. Some of these patients develop neurological symptoms weeks after recovering from other COVID-19 symptoms causing some researchers to be concerned that neurological symptoms could arise in recovered patients in the years to come, leading to an epidemic of "pandemic-linked brain damage."

These long-term neurological effects of COVID-19 were described in a recent study by researchers at the University College London and published in the journal Brain. Interestingly, none of the patients in the study who showed neurological symptoms had CoV-2 virus in their cerebrospinal fluid, indicating that the virus did not directly attack their central nervous system. This means that the neurological problems might be due to indirect effects of the virus, possibly triggered by the immune response to the infection. This is a bit surprising since the virus binds to cell receptors that are found on cells that line blood vessels, so it would not have been surprising to find the virus in cells along vessels in the brain and spinal cord, which could have explained the occurrence of micro-infarcts, and hemorrhages that lead to mini-strokes.

There might be different mechanisms that affect neurological activity in COVID-19 patients. Some patients suffer intense, system wide inflammation caused by an overactive immune system. The immune system inexplicably goes haywire and releases hormone-like proteins called cytokines that help activate other immune cells and cells that cause inflammatory responses. If too many cytokines leak into the bloodstream, immune and inflammatory cells start killing anything they encounter. This response, called a cytokine storm, creates massive inflammation that weakens blood vessels, causing fluid to seep into the lungs’ air sacs, triggering respiratory failure. A cytokine storm can also inflame the brain, causing encephalitis as well as damaging other organs resulting in multi-organ failure.

When “cytokine storms” inflame the lungs that can lead to reduced oxygen transfer to the blood, which affects brain function. The storms can also cause inflammation and swelling in the brain or spinal cords. Both of these effects can cause hallucinations, motor dysfunction, and psychological problems. This is sometimes seen in other viral infections such as chickenpox, measles and tick- or mosquito-borne viruses that cause encephalitis.

Since the US now has 5 million cases of COVID-19 and growing, this portends for thousands of people with lasting cognitive and motor deficits in the future. This is similar to a phenomenon observed in the decades following the 1918 Spanish flu pandemic: Between 1917 and the 1930s, more than 1 million people who had the flu were diagnosed with encephalitis lethargica, or "the sleepy sickness." The disorder, caused by swelling in the brain, brought excessive sleepiness and severe neurodegeneration that left many Spanish flu patients disabled.

Many COVID-19 patients, including young, healthy ones, also suffer systemic clotting in microvessels throughout their bodies that can affect multiple organs including the brain where they cause strokes. Although it’s surprising to see strokes in young people, these strokes should perhaps be expected given that they were also observed during the 2002-2003 outbreak of SARS, a related coronavirus. Most of the strokes reported with COVID-19 have been “ischemic,” meaning a clot plugs vessels supplying blood to the brain. If an ischemic stroke blocks the supply of blood for too long, it can kill the downstream area of the brain. However, a smaller number of stroke-related COVID-19 cases involve hemorrhagic stroke, which occurs when a weakened blood vessel ruptures and bleeds into the brain, damaging the fragile surrounding brain tissue.

It is not yet known how common strokes might be among COVID-19 patients since the virus is so new, and because most of the observations have been in ICU patients. That means the record is missing patients who were discharged from the hospital and later developed a COVID-related neurological sequela, or people with neurological symptoms whose infections were mild or even asymptomatic and not diagnosed as COVID-19.

In other words, we will see.

Thank you for the information on this blog.

I realize that most readers of this blog are not trained to read MRIs. Rest assured that MRI scans in this blog post are grossly abnormal. Based on these scans, a medical school professor friend told me he was astonished at how severely COVID-19 can affect brains.