The Differences Between The Moderna And Pfizer mRNA Vaccines

Since the vaccines rolled out, people, including me, have talked about the Pfizer and Moderna vaccines as simply being interchangeable versions of mRNA vaccine technology platforms. They both use part of the CoV-2 viral mRNA sequence to temporarily express parts of the viral spike protein on muscle cells in order to stimulate a protective immune response against the live virus. Since mRNA is very unstable and would quickly degrade if it were injected by itself, both vaccines encapsulate it in lipid nanoparticles, or liposomes, which both protects the mRNA and helps it fuse to cell membranes and insert the genetic material into the cells where it is translated into the protein. So, the Pfizer and Moderna technologies are very similar.  But they are not identical. At first blush, the differences appear subtle, but we are learning that they seem to manifest themselves in different, not-so-subtle biological ways. Let’s take a look at the how the vaccines differ.

The formulation: The lipid nanoparticles that carry the mRNA are a bit different between the Pfizer and Moderna vaccine platforms. While the exact formulations are proprietary intellectual property owned by each company, we do have a little bit of information about how they are similar and how they differ. Both platforms are concoctions of several different lipids designed to spontaneously assemble in aqueous solutions into small, “artificial cells” that encapsulate the mRNA payload. The lipids in both vaccines include polyethylene glycol (PEG), which can have multiple effects on the properties of lipid nanoparticles; they can affect particle size and particle stability. Certain PEG modifications can also prolong the blood circulation time of nanoparticles by reducing clearance of the liposomes by the kidneys and by scavenger immune cells called phagocytes.

The Pfizer vaccine also contains two proprietary lipids known as ALC-0315, and ALC-0159 as well as cholesterol, all in a very precise ratio. The Moderna vaccine platform consists of lipids that are not as well-known publically because the company is in litigation over the intellectual property with Arbutus, which developed the lipids that were licensed by Moderna.

Basically, viruses are naturally occurring liposomes encapsulating genetic material. The nanotechnology community has long been trying to create “artificial” virus-like nanoparticles that do not replicate or spread like a live virus in order to deliver fragile molecules, like mRNA, to cells for therapeutic reasons. Therefore, the goal of therapeutic liposomes is to create a virus-like lipid bilayer membrane (see figure) in order to deliver a drug or vaccine payload to cells. Mixing amphiphilic fatty acids, which are lipids where one end is water soluble (hydrophilic), while the other end is not (hydrophobic), in an aqueous solution allows them to spontaneously assemble into virus-like nanoparticles, or mini-cells. A water soluble payload (mRNA in this case) is captured in the central blue area and is protected by the outer lipid membrane. When these artificial cells bump into a live cell, the lipids on the two membranes fuse dumping the therapeutic payload into the cell’s cytoplasm.

There are endless combinations of amphiphilic lipids which can form such pseudo-cells, the properties of which can be modified depending on which lipids are used. For example, the selection of lipids used in both vaccines give the surface of the liposomes a mild positive charge, which facilitates their ability to stick to the negatively charged membranes of live cells.

What all this means is that the specific lipid formulation used in the Pfizer and Moderna vaccines affects the delivery of mRNA to cells, but we do not have enough detail to be able to suss the effects of the different liposome compositions on the efficacy of the vaccine. Those details mostly remain trade secrets. 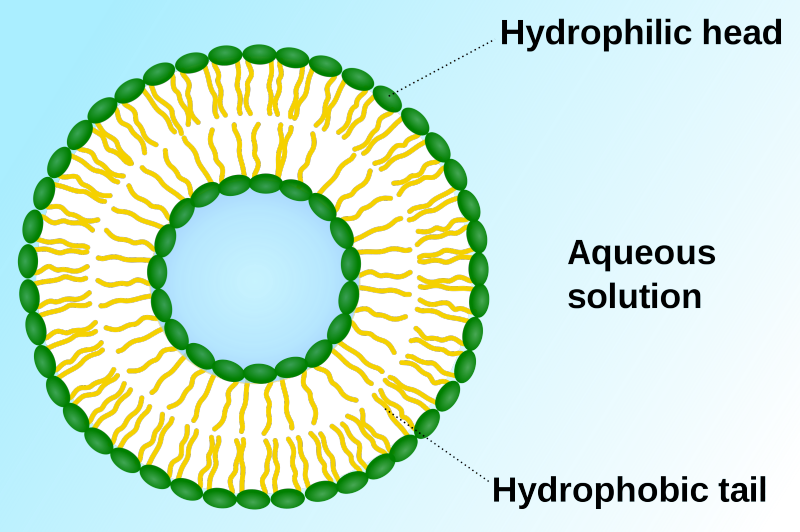 mRNA sequence. Both the Moderna and Pfizer vaccines use mRNA that encodes part of the spike protein of SARS-CoV-2, which sits on the surface of the virus and binds with the ACE2 receptor on the cell surfaces of many tissues. mRNA molecules are chains of four nucleosides arranged in a gene-specific sequence code that cells then translate into a specific protein. However, when a foreign mRNA is injected into a body, the mRNA itself can be recognized by the immune system and neutralized before it can enter a cell and express its cognate protein. For this reason, both the Pfizer and Moderna mRNA vaccines have been modified to incorporate a synthetic non-natural nucleoside, 1-methylpseudouridine, which reduces the ability of the immune system to recognize the foreign mRNA and improves its stability and expression of its protein.

The spike molecule consists of two protein subunits, the first of which is responsible for the initial binding with ACE2, while the second promotes the fusion between the virus and the cell membranes. The mRNA sequence incorporated into the Moderna vaccine, mRNA-1273, specifically encodes the pre-fusion form of the second spike protein subunit that is found on the surface of the virus before it binds to the ACE2 cell receptor. The mRNA sequence is modified to produce a spike protein with two amino-acid substitutions at positions 986 and 987 on the protein that help to keep it in the pre-fusion state. In contrast, the mRNA utilized by the Pfizer-BioNTech vaccine (BNT162) only encodes part of the spike protein on the first subunit that specifically binds to the ACE2 receptor. Thus, the two vaccines drive immunity to different parts of the spike protein molecule.

Perhaps more importantly, the dose of mRNA in the two vaccines differs. The Moderna vax delivers a 3-fold higher dose (100 mcg) of mRNA compared to the Pfizer vaccine (30 mcg). This  means that more spike protein antigen to stimulate an immune response is expressed from the Moderna shot.

What does it all mean? Initially, these differences in lipid composition, mRNA sequence, and mRNA dose do not seem to affect vaccine effectiveness. Both are extremely effective at protecting against COVID-19 within a few months after the second shot. But, over time, differences in the effectiveness of the vaccines are showing up.

Last month, the Mayo Clinic released a preprint of a large study of 645,109 patients after vaccination. This assessed the level of protection from infection in people vaccinated with the Moderna or Pfizer vaccines, or who were unvaccinated between January–July, 2021. Both vaccines continued to be very effective at preventing hospitalization, ICU admission, and death relative to unvaccinated people over the period of the study. However, prevention against mild to moderate COVID-19 was somewhat lower for both vaccines in July compared to January. Vaccine immunity faded a bit over that time. Importantly, the efficacy of the Pfizer vaccine faded faster over this time compared to the Moderna vaccine. A more recent CDC analysis of COVID-19 emergency room or urgent care visits for ~33,000 people between June-August 2021, when the Delta variant was predominant in the US, showed that overall the vaccines were 86% effective at protecting against serious COVID-19. But, vaccine efficacy for those who received the Moderna vaccine was 92%, while those receiving the Pfizer vax showed 77% protection.

The back story: There are four known CoV-2 variants in the US that are more transmissible than the parent strain. They are the UK variant, which is 70% more infectious and 60% more deadly than the original strain. There also are Californian and Brazilian variants that are more transmissible, but it is not yet known if they are more deadly. However, in Brazil, their variant is associated with a significant increase in infections and ICU stays for young, healthy, unvaccinated people. Fortunately, the current vaccines seem to be effective at preventing infection with these strains.

More worrisome is the South African variant that is 50% more transmissible. It is worrisome because the AstraZeneca vaccine is not very effective against this variant, and a very recent, but a small study out of Israel suggests that the Pfizer vax might have reduced efficacy against the S. African variant. It is not yet known if this strain causes more serious disease. These findings provide evidence that mutation can produce new viral strains that can evade the immune response to the viral spike protein.

Two other variants, the so-called New York variant, and a second Brazilian variant have early signs of being more infectious or even being able to reinfect people who previously had COVID-19. Data are still being collected in order to better understand the risk that these variants pose. Stay tuned.

You can follow the variants in the US here.

The bottom line is that the world is in a race to roll out vaccines faster than troubling virus variants can arise. The UK is expected to reach herd immunity​ early next week. Infections there dropped by 60% during March, with deaths dropping more rapidly, indicating that the vaccines are helping prevent severe illness and viral spread. Meanwhile, the US leads the world in total vaccines administered (175 million), with 43% of the adult population having received at least one shot. More than 700 million doses have been administered world-wide.

The major concern is that a too-slow vaccine distribution, such as what has happened in Brazil, will encourage more virulent variants to arise. If we don’t quickly achieve herd immunity across the world, it probably will just be a matter of time before a variant arose that renders the current vaccines useless, and we would have to start over.

What is a world to do? Besides increasing surveillance of viral variants, a couple more prevention initiatives are in the works. One is economic and the other scientific.

Economics of viral mitigation: The economic approach is detailed in an article by the Associated Press Economics Writer, Martin Crutsinger. Basically, the International Monetary Fund (IMF) proposes giving $650 million to support vulnerable countries struggling to deal with a global pandemic. Along with that, the Group of 20 major industrial countries issued a joint statement that announced a six-month moratorium on debt payments by 73 of the world’s poorest countries.

The rationale behind these actions is to ensure that poor countries, where vaccinations are lagging due to lack of resources and infrastructure, can pick up the pace of vaccination. Their lag in rolling out shots is a threat to the whole world, even while wealthy countries are approaching herd immunity. In order to beat the variants, vaccines are needed to quickly create herd immunity and stop viral spread before a variant that can avoid vaccine immunity appears. When countries lag in vaccinations, the virus continues to spread increasing the chance for an immune-avoiding variant to pop up. Such a variant can then spread to countries that are highly vaccinated, starting the pandemic over again because the current vaccines would be ineffective. We would be back at square one.

Science to the rescue: So far, all the vaccines, except one from China, which uses the whole virus, direct the immune response to the viral spike protein that is used to attach to receptors on the surface of cells in your body. The viral variants we are concerned about show mutations in the spike protein that allow them to become more infectious, and in one case, to be less affected by some of the vaccines. In addition to trying to  nip the virus in the bud by quickly building world-wide herd immunity, new vaccine strategies are being developed to quickly respond to newly arising CoV-2 variants, and even to respond to entirely new strains of viruses that will arise in the future.

We are in a revolutionary era of vaccinology. BioX marches on.